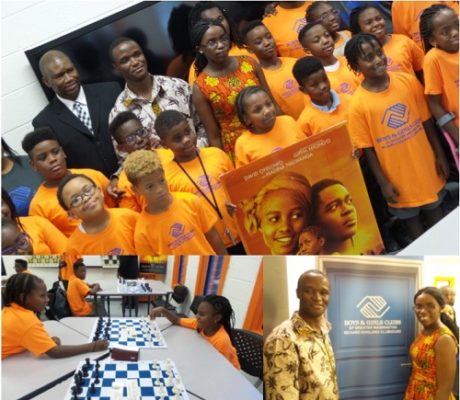 On September 14, the members of Richard England Clubhouse 14 were treated to a Meet & Greet with chess prodigy, Phiona Mutesi. Miss Mutesi’s extraordinary success is captured in Disney’s Queen of Katwe motion picture.  It tells the story of how at the age of 9, she went from living in the slums of Katwe, Uganda to learning chess at an outreach program. She became one of her nation’s top chess players competing in international competitions.

Accompanied by her mentor, Coach Robert Katende, Phiona shared her words of inspiration and empowerment. This special encounter proved to invigorate our members. Nine year old Senora Akoma said, “I was inspired because she came from a country where they did not have anything and was able to become the best in the world as a chess master.”
Clubhouse 14’s Chess coach, Jermaine Kingsbury, expressed his appreciation for the visit and says that kids learn lessons that extend beyond the game of chess. “In order to teach chess properly, I focus on strategy and patience. Being precise and patient in life allows us to prepare for success and make the correct moves when the time is right. I try to get Club members to understand the importance of moving with a purpose. This teaches them life lessons such as setting goals and living every day with a purpose.”
Days after the visit, youth members were treated to a viewing of the movie. At the conclusion of the film, the kids cheered with excitement and were thrilled to have met the real life Phiona. According to Program Director Shawn Osborn, after seeing the movie over 30 youth signed up for chess. Osborn says, “That’s more than we’ve ever had.”