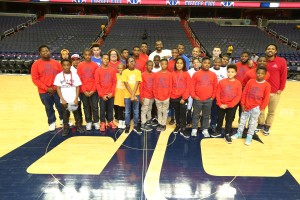 All-Star Wizards’ basketball player John Wall is a devoted supporter of the Boys & Girls Clubs of Greater Washington. This year, he reaffirmed his support by gifting $35,000 to support the Passport to Manhood program through The John Wall Family Foundation.
Passport to Manhood is a national, evidence-based program designed to engage young boys, ages 11-14, in discussions and activities that build and reinforce character development, leadership skills and positive behavior. As part of the program, each participant is given a “passport” to track his personal journey of maturation and growth.
In addition to in-Club sessions, Club members have been given opportunities to explore a world beyond the blue door of the Boys & Girls Club. They include: 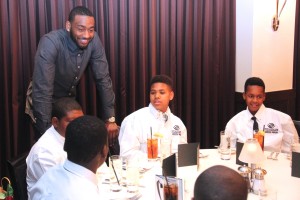 On Sunday, December 20, 2015, John Wall hosted a holiday dinner for 30 young men who were treated to a four-star dining experience at Joe’s Seafood, Prime Steak and Seafood restaurant in Washington. During dinner, John spoke with the Club members about the importance having goals, dreams and aspirations. He shared his personal story and talked about “giving 100% in everything you do, or don’t do it all.”
A Q&A session was conducted by Comcast SportsNet anchor Chris Miller. Both men stressed the importance of getting an education, goal setting, and the state of the sports industry. Wall especially addressed the priority of giving back to the community.
The evening closed with a final surprise from John in which he gifted each member a Wizards’ game ticket. The excursion included concessions vouchers and a photo opportunity with John on center court, as well as a gift bag filled with items from John Wall and Adidas. 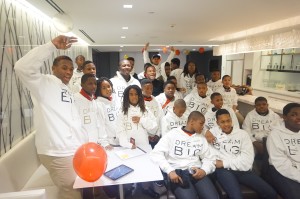 The next stop on their journey took place on Monday, December 21, 2015 when the young men traveled to New York for a day at the SeanJohn headquarters. The day began with lunch in the SeanJohn Board room, followed by a career and professional session with Mr. Jeff Tweedy, President, of SeanJohn Brands. Having grown up in Southeast, Washington, D.C. near Richard England Clubhouse 14, Mr. Tweedy shared his road to success coming from the challenges of living in the inner-city. After the session, members were able to tour the facilities and speak with different professionals in the Creative, Marketing and Human Resources departments. The day was capped with the members taking a trip to Macy’s Herald Square where they learned styling tips in the SeanJohn department.
The day was chronicled by Revolt TV, a cable music channel launched by Sean Combs.
Quote:
Tremaine, age 17, Dunbar Alexandria-Olympic Branch Member – “I like how it {Passport to Manhood} has taught me how to deal with real life choices.”