Deepening the Impact at Murraygate Village

Since 2011, the Murraygate Village Club has gone through an enlightening transformation that is being noticed throughout the Boys & Girls Clubs movement. At the helm of this change are the Branch Director, Michael Bruins and the Program Director, Elizabeth Rainey.
When Michael and Elizabeth came aboard, they spent much of their time observing not only the 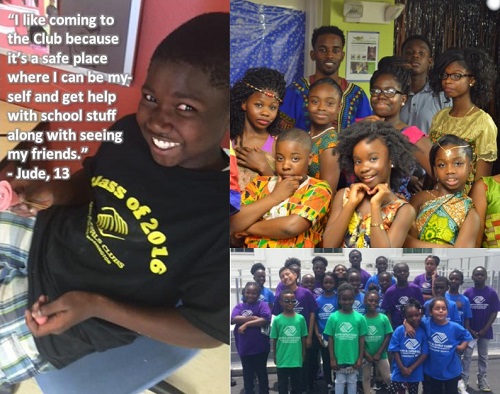 needs of the kids but also the unique requirements needed within the community. The most pressing were the general operations of the Club, understanding its culture and enhancing its programs.
The first phase of revitalization began with a major renovation. The sheer ability to serve 35 kids in a 1484 sq. ft. apartment presented multiple challenges. Staff was determined to make the space a safe, warm and inviting environment. One that encouraged learning, growth and a sense of ownership. The facelift consisted of painting, new carpet and furniture, upgraded computer, inspiring art work and interactive games.
The staff then went to work on building new relationships and strengthening existing key partnerships. Through this work, programming became more focused on representing the needs, perspectives and viewpoints of the members and their families.
Fast forward to 2016, Murraygate is experiencing the positive residual effects of the work that was put in over the past three years. Recently, the Club was recognized by Boy & Girls Clubs of America as the 4th ranked Club in the National Youth Outcomes Initiative’s (NOYI) Overall Club Experience poll. NYOI uses common, credible indicators such as school attendance, reading and math proficiency, on-time grade progression, and the avoidance of risky behaviors to measure the Club experience. Murraygate has had three consecutive years of very high NOYI scores but this past year was significantly higher. It scored an impressive 88% score (the National average is 37%)!
When asked about this success, Minnie Annan, Director of Member Impact said, “I’m very proud of Murraygate! Stories tell, but numbers sell, and the amazing numbers coming out of Murraygate tell and sell the impact we are having in the community. We hope to replicate this success throughout the organization.”
Murraygate has always been special because of it’s a very communal culture and setting. The staff, parents, members, and community view each other as family and work to ensure that everyone’s well-being is the first priority. This has helped to maintain a strong consistency in attendance, outcomes, empowerment and participation in BGCGW events such as Youth of the Year, STEAM Expo and in the ICON Talent Showcase.  Club member, Jude Adekurah has been coming to the Club since he was a kindergartner. Now 13, Jude says, “The Club is a major part of my week. I like coming to the Club because it’s a safe place where I can be myself and get help with school stuff along with seeing my friends.”
The heritage and culture of the members are heavily represented and celebrated throughout the Club. Michael Bruins says, “I’ve watched the Club go from a community center with outdated games to a safe space where the members can be creative, assertive, innovative and confident. Bruins adds, “Our Club is now a recognizable name within the organization and community, but the best outcome is the fact that our members are proud to be members.”