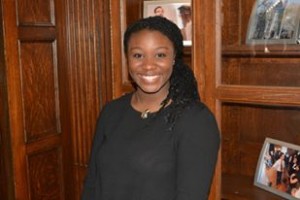 Congratulations to Ms. Ayanna Holmes, Boys & Girls Clubs of Greater Washington’s 2015 Youth of the Year. On Saturday, March 7, BGCGW celebrated the success of six Youth of the Year finalists during a luncheon at Georgetown University’s Copley Formal Lounge. This year’s finalists were: India Khanna, Dunbar Alexandria-Olympic Branch; Ayanna Holmes, FBR Branch @ THEARC; Destiny Malloy, Hylton Branch; Kabriya Booker, Richard England Clubhouse #14; Abigail Boamah, Murraygate Village Club and Taylor Hinebaugh, Manassas Branch.
Established in 1947, Youth of the Year has been Boys & Girls Clubs of America’s premier recognition program, honoring the extraordinary achievements of Club members. Candidates must be between the ages of 14-18 and exemplify outstanding leadership skills, academic achievement, and service to club and community. Each year, one exceptional young person rises to the role of National Youth of the Year, becoming an exemplary ambassador who not only speaks as the voice of Club youth everywhere, but also stands up to represent all of our nation’s young people.
As BGCGW’s Youth of the Year winner, Ayanna was honored with a $3,000 educational scholarship sponsored by our longtime partner, GEICO. BGCGW is also proud to honor Destiny Malloy, Hylton Branch Club member and Kabyria Booker from Richard England Clubhouse #14, both of whom will serve as 2015 Youth Ambassadors- each winning $1,000 in educational scholarships.
Next up, Ayanna will vie for the distinction of becoming one of five regional representatives across the country, and ultimately contend for the title of National Youth of the Year of Boys & Girls Clubs of America.