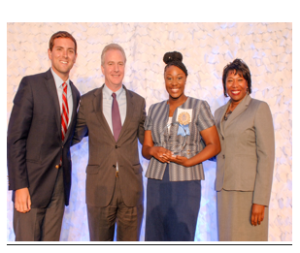 On May 13, Boys & Girls Clubs of Greater Washington hosted the 30th Annual Tim Russert Congressional Dinner at the JW Marriott in Washington, DC. Chaired by David M. Velazquez, Executive Vice President Pepco Holdings Inc., the dinner honored the Honorable Julian Castro, Secretary of the U.S. Department of Housing and Urban Development; Congressman Paul Ryan, (R- Wisconsin); John Castellani, President and CEO, PhRMA; John R. Thompson Jr., Coach Emeritus Georgetown University Basketball; and Ayanna Holmes the 2015 BGCGW Youth of the Year. As always the highlight of the evening was our kids.  Throughout the evening they shared their talents and stories as they presented the awards to our honorees.
The Tim Russert Congressional Dinner has become a longstanding BGCGW tradition and signature event for BGCGW. The first Congressional Dinner, held in 1986, was created as an opportunity to recognize both national and local leaders for their continued support of and devotion to the children served by Boys & Girls Clubs of Greater Washington. In 2009, the event name was expanded to honor of a true advocate of the Clubs, Tim Russert, whose efforts helped to raise awareness and support for the youth of our nation, particularly here in the Greater Washington area. 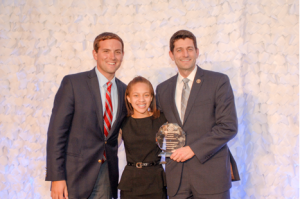 Luke Russert, NBC News Correspondent and son of the late Tim Russert, served as master of ceremonies for the fifth year. Thanks to contributions of so many who care, close to $1.3 million was raised to support more than 11,000 Club members at 14 sites throughout the District, Maryland and Northern Virginia.

We Congratulate our 2013 Youth of the Year